How to Properly Reset a Circuit Breaker 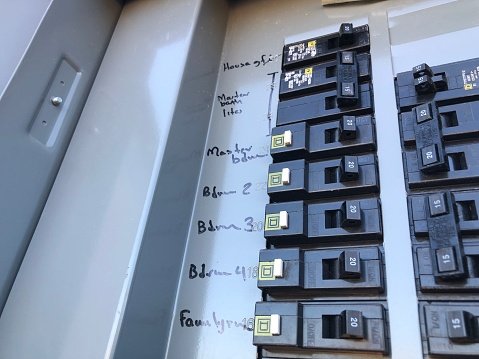 Reset Circuit Breaker Pflugerville. Take a moment to imagine that you’re about to do one of the many things in your home that requires power when, suddenly, your entire home goes dark. This could serve as an indication that your circuit breaker has overloaded. Generally, this type of sudden shutdown purposely happens in order to safeguard all of your electronics, as well as make sure that the circuit itself doesn’t overheat and prevent damage to the electrical panel itself.

Thankfully, resetting a circuit breaker is a process that is easy to do and can be accomplished by following a few simple steps.

Here are the steps involved with properly resetting a circuit breaker.

*First and foremost, begin by locating your circuit breaker box. In the event that you may not know where to find this, you will need to take the time to look for it. An electrical panel is often easy to identify, as this is the gray metal box typically attached to a wall inside your home, most often the basement, garage, or utility room.

*Next, take the time to determine which breaker has tripped in your home. If the switches in your breaker box are labeled to which areas they provide power to, this will make your job much easier. All working switches will generally be in the “on” position, while the tripped breaker will not be.

*The next step is to reset the tripped breaker. Simply move the affected switch to the “on” position in order to restore power. On the other hand, if the switch is in the middle position, move it to the “off” position before then turning it on. Additionally, make sure that you wear safety goggles as a precaution and stand to the side of the breaker box, as the box itself can sometimes spark when a switch is reset.

*Next, take the time to test an appliance. If the aforementioned steps have done their job, all appliances and lights will turn on. If not, then this could mean that there is a more serious issue.

*Reset Circuit Breaker Pflugerville. Finally, if the reset doesn’t work, contact a professional electrician to take a look at the issue. This is because they will have all of the proper tools to determine if there is a more serious problem that has caused the outage to occur in your home.